Bulgaria is a piece of paradise not much known to the world. The country is situated in south-eastern Europe, bordering Romania to the north, Serbia and the Republic of Macedonia to the west, Greece and Turkey to the south, and the Black Sea to the east. It has a relatively small size, but a great variety of topographical features – plains, plateaus, hills, mountains, basins, gorges, and deep river valleys.

East or west – there is a lot to see and experience both in terms of nature, natural wonders and customs in Bulgaria. In this post I will dwell on a few spots in west Bulgaria that are very dear to my heart on the way to Tran (Bulgarian: Трън, meaning “thorn”) – a small town in Tran Municipality, Pernik Province, western Bulgaria. It is 27 kilometres from the town Breznik and 15 km from the border with Serbia. The town was first mentioned in 1451 as Tran.

Driving along the picturesque road in western Bulgaria from Sofia through the town of Breznik on the way to the town of Tran (in the vicinity of the region from where the Thorn Water comes) one passes by a village called Paramun (coincidentally as pronounced by some people it sounds very similar to Paramount). Paramun (Bulgarian: Парамун) is a village in Tran Municipality, Pernik Province. It is located in western Bulgaria, 66 km from the capital city of Sofia and 14 km from the town of Tran, near the Serbian border. There is a peak nearby (on the photo taken en passant) which coincidentally very much reminds of the peak one sees on Paramount Pictures. It might be just my associative thinking. However, the scenery is spectacular.  But as I have this bee in my bonnet on the visual similarity of the Paramun peak with the peak on Paramount pictures, I come back to this region time and again for picnics & more photos. At this link (in Bulgarian) I came across an interesting discussion on the subject of Paramun and Paramount.

Driving further west one arrives in the small town of Tran. Annually, in the beginning of June, Tran hosts a folk festival of Bulgarian dances and songs. This year we experienced some unforgettable moments. Here is just a glimpse:

An impressive gorge, located some 3 km from the town of Tran on the river Erma, offers great views from the eco path & bridges going right through it. A picnic by the river, the pebbles of which have a rubin-like red colour, makes a great day out in nature. Tran is some 80 kilometers away from Sofia. One distinctive feature of the town is the specific Tran dialect of the Bulgarian language spoken in Tran, which is part of the Transitional dialect group. 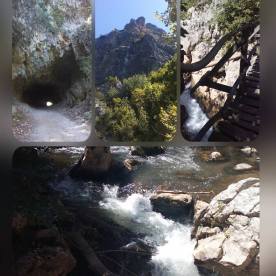 In Tran up on the hill, a place worth visiting, is the small centuries-old rock temple of St. Petka, probably dating back to the 10th century. A hospitable local woman takes us around and tells most interesting stories about it. Saint Petka of the Balkans was an ascetic female saint of the 10th century. She was born in the town of Epivates (close to today’s Istanbul) on the shore of the Sea of Marmara; her parents were wealthy landowners. The legend says that when she was a child, Petka heard in a church the Lord’s words: “Whoever wants to come after Me, let him deny himself, and take up his cross, and follow Me.” (Mark 8, 34). These words would determine her to give her rich clothes away to the poor and flee to Constantinople. Her parents, who did not approve of her decision to follow an ascetic, religious life, looked for her in various cities. Petka fled to Chalcedon, and afterward lived at the church of the Most Holy Theotokos in Heraclea Pontica. She lived an austere life, experiencing visions of the Virgin Mary. Her voyages took her at one point to Tran where she is believed to have found shelter in this cave. She died at the age of 27. Now the small temple attracts numerous pilgrims. There is a place in the rock where her step is imprinted – now a place where one can pray with faith and it is believed wishes are granted.

And further west to the Sebian border there is the peaceful small village called Nasalevtsi, where one comes across an awesome 600+ centuries-old oak tree. The village of Nasalevtsi is some 10 kms away from the town Tran. In 2016 the oak tree was nominated as Tree of the Year 2017. The European Tree of the Year contest originated in 2011. It was inspired by the popular Tree of the Year contest, which has been organised in the Czech Republic by the Czech Environmental Partnership Foundation for many years. The purpose of the European Tree of the Year is to highlight the significance of old trees in the natural and cultural heritage that deserves our care and protection. Unlike other contests, the European Tree of the Year doesn’t focus on beauty, size or age but rather on the tree’s story and its connection to people. Every year dozens or rather hundreds of thousands of people participate in the contest. The number of countries participating has increased from 5 to 16 and Bulgaria is among them. 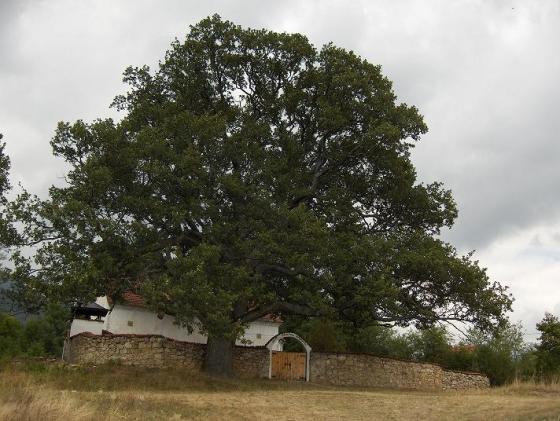 Under the magnificent shade of the oak tree is the Church “Nativity of Our Most Holy Lady, the Theotokos”. The church is one-nave, the dimensions are 7.95×16 m, the walls are massive, with a thickness of 1 m. The apse is in the shape of a Pentecost. It is covered with a double-sided roof, formed on the inside as a cylindrical vault. The apse has a separate conical cover. The church is further strengthened with metal straps. There are two entrances – from the south and from the west. Above the west entrance there are six-leaf rosettes, and above them, there is a niche. The church has its special celebration on 8th of September each year with a procession, going round the clock counterclockwise.

And up the slope of the hill at the top where the rock can be seen (known by the local people as Щърби камик [The Clipped Stone] passes the border between Bulgaria and Serbia.

One of those little-known, but peaceful & most relaxing nature spots in Bulgaria. A lot to see, enjoy and experience around.

Get in Touch! Cancel reply